Our first tour was in the lovely summer of 1999 with the commedia dell’arte inspired play of twins, mix-up’s and confusions, Shakespeare’s appropriately named under the circumstances ‘Comedy of Errors’. We had a cast of nine, hopelessly low wages and a set that initially took four hours to put up until Pete Talbot stayed up most of the night after about the third show and rebuilt it! We performed 37 times across mainly East and West Sussex with a short tour to Dorset. We made a huge loss but at least we had begun.

We went for another Shakespeare in 2000 in order to continue building a fan base. Again, although it doesn’t have an obvious association with the scenarios of the commedia dell’arte, with its pairs of lovers, or innamorati as we would call them, it could easily be interpreted in the style. It was always our intention to eventually make our own commedia plays but we needed time to learn, develop our style and build our audience. Although we didn’t go back to Dorset (that would have to wait) we began to visit Hampshire with our first show in Selborne and also in the other direction to Kent. It was quite successful financially. We were beginning to grow. People were asking us back. We were building strong relationships with communities. Many of them have remained close friends to this day.

Our third and final Shakespeare, Twelfth Night, came in 2001. Again it was a plot he had taken from Plautus, a primary source of many commedia scenarios. It was back to cross dressing, mistaken identity, confusion and identical twins, the raw material of the tradition. Of course Shakespeare turned it into a masterpiece – and it was perfect for our final ‘classic’ before launching off on our own. It was very successful and we formed a core fan base that has stayed with us. 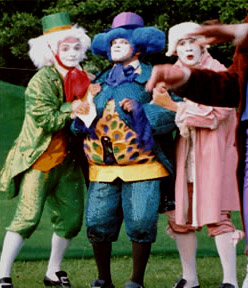 It was never our purpose to merely regurgitate old plays. We wanted to make our own characters and say the things we wanted to say. But these three plays provided the foundations. We have often been asked to do a Shakespeare again, but it’s not what we now do.

“This production is a joy to see. Rarely have I enjoyed Shakespeare so much”